Essential Cuisine Partners with Brakes to Inspire Next Generation of Chefs

Ronnie’s career as a chef came about quite by accident after he took a job as a KP straight out of college. His love for kitchen life was soon sealed, however, as he began to work his way up through the ranks, taking in some of his home town of Edinburgh’s best hotels along the way.

On the morning of Saturday 7th of September Essential Cuisine colleagues gathered at Sandy Lane car park to take on their 2019 summer charity challenge. This year the task ahead was a 12-mile kayak along the river Dee from Farndon to Chester! After a thorough(ish) health and safety brief we were kitted out and ready to enter the water, somewhat ungainly. 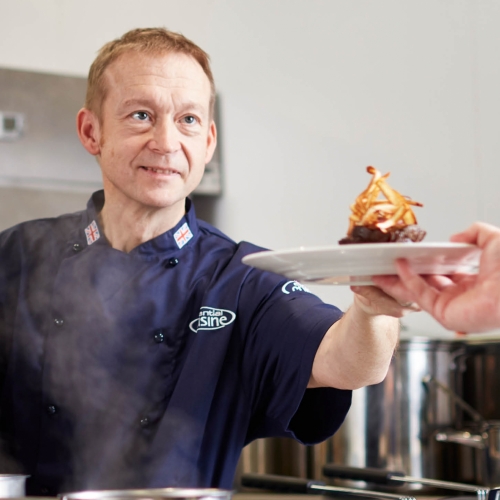 Simon has the Military to thank for his discipline and dedication to the Essential Cuisine cause. Training as a chef in the mid-1980’s, he spent the following decade serving in the army “trying hard not to be killed”, before taking up the entirely more straightforward mantle in professional kitchens.

His second career took him from beachfront hotels in the Channel Islands to cooking for the employees at car giant Bentley in England’s North-East, eventually working his way up through the ranks to the position of Head Chef.